How Do Drones Work? A Simple Yet Comprehensive Answer

How Do Drones Work? A Simple Yet Comprehensive Answer

Drones are high-tech, they can be used for various purposes, and they’re super cool. With that being said, before you buy a drone, you might want to know how they work. They might look relatively simple, but there is a lot of technology that goes into making drones. Let’s take a closer look at drones, their main components, and how they work.

One of the first things to know about drones is how they connect to their control mechanism. This is done in two ways.

First, some drones have dedicated remote controls, similar to RC cars. These controls use a wireless radio signal to communicate with the drone, taking place on various frequencies.

On a side note, although not nearly as common or reliable, some drones may also be able to connect to your phone, tablet, or laptop via Bluetooth connection.

Rotors for Liftoff – The Propulsion System

A drone needs a propulsion system to fly. Without getting too bogged down in the mechanics, a drone works much like a helicopter in this sense. A drone has a small motor connected to a propeller or a series of propellers that produce vertical lift.

What is interesting to note is that most drones have a hover or altitude hold feature. When this is activated, two of the propellers move in a clockwise motion, and two move in a counterclockwise motion. High-end models may come with cooling systems to keep the motor from overheating. Keep in mind that drones generally use batteries to power their motors and other features.

You will want to look for a drone with an obstacle detection system and a collision-avoidance system, which generally tends to be one and the same.

As the name suggests, this tech is designed to detect nearby obstacles and prevent you from flying your drone into them. However, not all drones come with these systems, but the more advanced models do.

The type of technology used to achieve this function depends on the specific drone. Drones use various sensors, either one kind or a combination of sensor types, to see and avoid obstacles.

Sensor types may include a vision sensor, monocular vision, ultrasonic, infrared, LIDAR, and flight technology time. The best drones will feature a combination of sensor types that provide the drone with a 360-degree view of all potential obstacles.

One of the most essential components of any good drone is the gyroscope. Simply put, a gyroscope is a device with a wheel or a disk mounted in such a way that it can rapidly and freely spin around an axis. It automatically adjusts the movement of the drone to correct for outside forces, mainly wind.

A drone’s gyroscope’s main job is to keep it stable and upright and maintain a reference direction. Gyroscopes can detect three types of movement in drones, including pitch, roll, and yaw. Without a gyroscope, a drone really could not fly.

Although fairly basic in nature, most, if not all, drones come with accelerometers to sense both motion and velocity. Accelerometers are needed to assess the speed, acceleration, and velocity of the aircraft. Most modern drones incorporate altimeters to measure the altitude at which they are flying.

A no-fly zone is defined as a zone where civilian and recreational aircraft are prohibited from flying. These usually occur around airports, military bases, and other related security-sensitive locations.

Although most basic drones do not have this tech, the more advanced ones do. If your drone has no-fly zone tech, it can automatically detect no-fly zones. This will prevent your drone from flying into them, thus preventing potentially disastrous accidents involving other aircraft and the resulting legal ramifications.

Many of the more-advanced drones come with GPS capabilities. This is really cool because it allows you to see exactly where your drone is on a map.

GPS also allows you to control the drone much easier, because you can see its exact flight path on a map, and many GPS drones will enable you to input coordinates to create a pre-set flight path.

The final thing concerns the drone’s camera. We aren’t going to get into how cameras work, because that’s a different subject. However, most drones have picture and video cameras, some of them being very high-quality. You can find drones with 4K cameras for a relatively low price.

Generally speaking, these will transmit to your phone or controller via Wi-Fi, over LTE, using 4G, or other related tech, and sometimes Bluetooth. Many modern drones can provide live video transmission.

Now you have everything that you need to know about how a drone works, or at least the most essential and typical features/aspects. As you can see, drones, especially the higher-end models, are very advanced and come loaded with modern technology. 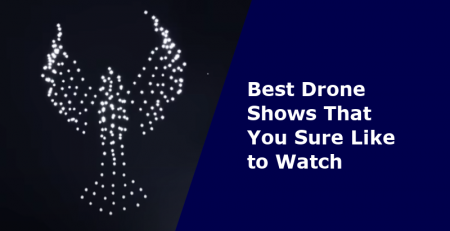 “Awesome”, “Beautiful”, “Out of this world”, “Unmatched”. The drone light show such... read more

Drones Rules and Regulations: What to Know Before Flying

The introduction of the DJI Mavic Mini by DJI has shed... read more