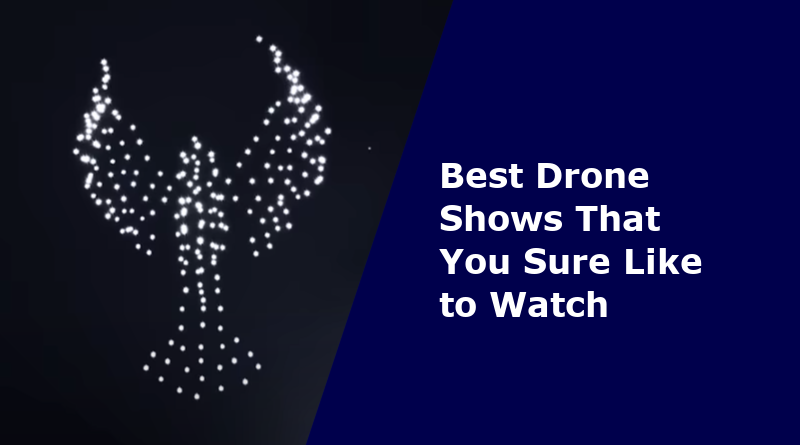 The drone light show such as Ars Electronica SPAXELS® employed for the Guinness World Record ‘Drone 100’ delivers such experience. We have received a lot of questions about the best drone shows. Here, we will share that list with you, Check it out!

Please note that in this post, we also refer to the term ‘drone’ as unmanned aerial vehicles (UAVs), crewless aircraft, flying robots, or flying machines.

Drone show: Precisely, what is it?

It is characterized by multiple aerial formations made through lit-up, in-sync, and carefully arranged groups. A computer program can recreate practically any image in the sky. In other words, it generates flight commands from graphics and communicates them to the flying machines.

The show results from a pretty straightforward process. To begin with, the designers produce a storyboard timeline for the requested images and effects. After that, dedicated software works to animate these looks. It will turn them into in-sync flight paths for each flying robot. And more often than not, a soundtrack goes with the drone display.

Complete shows get moved to the UAVs through a radio signal from a ground command center where a pilot operates. If he finds everything is all set, the show will begin. The UAVs will depart to draw the storyboard overhead.

The best drone shows so far

Cannot wait to admire them? We hear you, and here you are:

Spread across five months, the Riyadh Season is the city’s much-loved celebration. Even more, it is popular among Saudi Arabians. This biggest entertainment season in the region is indeed part of strategies the Kingdom of Saudi Arabia adopts to champion tourist and economic activity, geared more towards non-religious tourism. Upwards of 100 events, adventures, and concerts are brought around Riyadh to celebrate the whole country under a unifying theme.

On October 20th of 2021, Riyadh Season’s opening ceremony sees over 2500 crewless aircraft vehicles employed in a display taken charge of by the Geoscan Drone Show. They drew remarkable paintings atop Riyadh, the Saudi capital, in the presence of hundreds of thousands of visitors.

For your information, the preparations started one month earlier. The team in charge of running the UAVs comprised more than twenty technicians fully trained for accurate implementation of the drone light show. They played a large part in the error-free production of such distinctive, artistic paintings.

To be more specific, visitors had the chance to admire face images of the Two Holy Mosques Custodians and others of Crown Prince MBS. There were pictures of the fourteen regions’ logos. What was more? Spectators there got amazed by flying machines’ artistic performances, which brought about visual pleasure.

WorldSkills holds the global championships of vocational skills. It takes place every two years in various parts of the planet. It is worth noting that this contest draws the attention of the young, institutions, education, government, fostering the perks and demand for skilled trade professionals

August 25th of 2021 saw the presence of 1000 UAVs overhead, lighting up Ufa. Geoscan Drone Show was in charge of performing the best drone shows celebrating the opening of the WorldSkills Russia 2021 contest.

The audience could not get enough of a large number of flying robots generating brilliant figures and inscriptions on high. A Russian map, the solar system, a resurrected monument to Salavat Yulaev showed up miraculously before their eyes.

The day November 7th of 2020 perfected the presidential victory speech by president-elect Biden with a firework and drone light display in Delaware.

Crewless aircraft became airborne alongside fireworks, showing an incredible aerial performance. The show began with the fireworks. In a matter of seconds, UAVs made their appearance out of the darkness to generate stars in the colors of the United States. Coldplay’s A Sky Full of Stars played in the meantime.

Where Harris and Biden enjoyed admiring the scene from the stage, the flying machines created the campaign logo Biden used in the year’s election. With several UAVs in the background, producing a twinkling star effect, the remainder started to form a precis model of mainland USA and then made it full of red and blue.

The final sequence involved the aircraft displaying the words ‘President-elect.’ At the same time, the fireworks appeared, making it as if UAVs were shooting them out. To wrap up the show, the planes created the president’s name, the number 46, and the name of Harris. As you may know, 46 has to do with Biden being the 46th President of the United States.

On September 20th of 2020, 3,051 flying machines make an impressive performance in China, setting a new Guinness World Record. Guangdong China’s Shenzhen Damoda Intelligent Control Technology Company was the one behind that display success.

During the challenge, the designers showed off what the nation’s space science and technology have achieved overhead. These include its space station and the global satellite navigation system.

Thousands of UAVs departed in the early morning, creating a grid-like shape. From the gird, the shape into the globe form. Over the earth, the satellite system showed up. China independently developed this system.

After that, in the stars, the Tiangong space station was present. That spectacular appearance was made thanks to flying robots smoothly combined with lights.

Even more, the challenge finished off with the presence of a huge Mars rover, which demonstrates all mankind’s asperation for the universe exploration.

5. 2198 drones taking off in one of the best drone shows ever

On September 3rd of 2020, 2,198 aircraft vehicles that Geoscan Group was in charge of successfully appeared at the 75th anniversary of World War II end in Russia. This present got listed in the Record Book of Russia.

The planes flew over Russia’s Saint Petersburg for about ten minutes and spaned out over hundreds of meters. More specifically, they got transported in dense columns, which made shipping far simpler. Next off, they ascended gradually in groups to show 2020 alongside text in Russian. The flying robots created a formation of a man with two aircraft vehicles flying near him before turning into a Russian emblem. At the end of the display, a magnificent bird appeared, flapping its wings.

Intel is known as an industry leader that has generated revolutionary technology, boosting global progress and empowering lives. In July 2018, it celebrated its fiftieth anniversary with 2018 UAVs flying over the facility in California at the same time. The drone light show set Guinness’s world record.

The company had an idea of operating UAVs forming its logo over its headquarters some years ago. Amazingly, Intel worked to do just that. It did demonstrate the company’s innovative spirit.

During the opening ceremony of the 2018 Winter Olympics in Pyeongchang, 1,218 drones made beautiful performances, which broke the past world record.

Shooting Star platform from Intel perfected the display. A patchwork of quads flew simultaneously and swirled along an animator’s preset path. It is worth noting that the animation team produced a true-to-life snowboarder version with over one thousand UAVs leveraging a photograph of an actual snowboarder in action. That way helped create the flawless outline and shape atop.

8. Awaiting the best drone shows in ‘Christmas Capital of Texas in the upcoming December

Home to a multitude of traditional and unique holiday events spanning over forty days, Grapevine has been ever-increasingly popular for the signature ‘Christmas Capital of Texas.’ This 2021, the town boasts the presence of animated characters, huge decorations, and countless lights. On top of that, it brings you the Christmas drone show for the first time.

This drone display will be on December 11th and December 18th at night. Over 150 UAVs controlled by Sky Elements, drone show organizers from Texas will turn the Christmas sky over 815 S. Main Street into something super magical.

Who does not know or have not heard of BTS? Also referred to as the Bangtan Boys, this Korean boy band lightened the sky with flying robots during their Mikrokosmos song performance on The Tonight Show Starring Jimmy Fallon in 2020. It was indeed among numerous times BTS has counted on UAVs to boost their performance quality.

Premiered on YouTube in the morning hours, this performance was part of The Tonight Show-featured #BTSWEEK special. Since the performance began, you saw the flying machines’ reflection in the water. Then, you can see them flashing and generating an aerial star-like effect.

Better yet, the planes flashed and mimicked a stars-filled sky at night. You also saw the flying machines with real stars behind them covering and brimming the sky.

After that, the UAVs lit up and started with formation. In the next shot, you have a closer look at it as the planes were about to create a shape with the camera cutting away. About forty seconds later, the crewless aircraft vehicles had a symbol form closely associated with the group It was their Army symbol denoting the group’s fans. A couple of seconds later, the flying robots dispersed and formed the symbol of BTS. Awesome!

What is your thought about the best drone shows mentioned above? What do you find special about them? Do you know any other impressive shows? Do not hesitate to let us know in the comments section below. 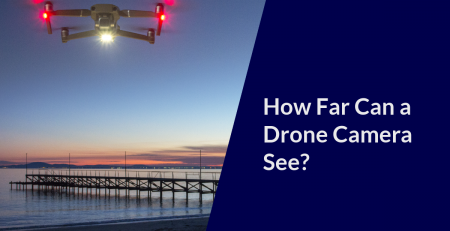 How Far Can a Drone Camera See Day and Night? (Read This)

Do you want your privacy to be respected? Then there is... read more 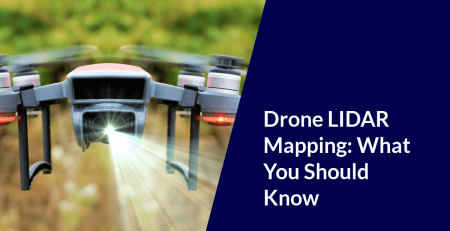 Drone Lidar Mapping: What You Should Know

A term that you may have heard before is LIDAR, but... read more 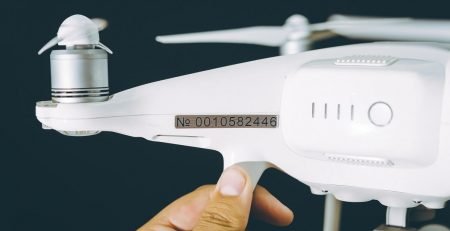 Drone Registration 101: How to Find Out if a Drone Is Registered

In case you are among the vast number of new UAV... read more